Global Commerce is an independent distributor of branded IT hardware. We trade NEW RETAIL LENOVO and HP.

We are the Danish commodities firm WERD and we buy, sell and distribute high-tech hardware across the globe. We were founded in Copenhagen in 1995. We believe in transparency, reliability and timely deliveries.

ITC’s core business is IT remarketing, IT re-marketing and IT brokerage. We buy primarily manufacturer-independent, used IT hardware and software of all sizes and market them then just continue.

Our company sells and buys IBM used equipment. We are specialized in AS/400 - RS/6000 and all peripherals.

DVST GmbH is your competent contact person for the procurement, marketing, administration and marketing Maintenance of IT systems and components.

We are largest Croatian second-hand IT equipment dealer with over 15 year experience. Buying frequently from EU suppliers.

The Company KM-Copysystems, with Headquarters in Hamburg, offers you high-quality Machinery of well known Manufacturers at unbeatable Prices. From the small A4 Copiers and Laser Printers to large Office Copiers.

’NRJ Soft’ is a leader in the design, construction and integration of different systems for security and management.

Webinstore AG was founded in 2004 and is specialized in remarketing ex-lease-and end of line IT-equipment to customers in Germany, Europe and around the world.

Interseroh is one of the leading providers of sustainable system services for the closure of product, material and logistics cycles. We advise our customers throughout Europe on the responsible handling of recoverable materials and thus help them to improve their sustainability performance.

This company mainly deals in IBM, Lenovo and HP servers, storages and parts. Our product portfolio includes both new and refurbished items. We have also EPSON consumables and MikroTik products in large quantity.

We are in wholesale of computer parts and monitors.

BOXED, s.r.o. is operating on markets in Czech Republic and Slovakia. We are focused on EDU, GOV and non-profit market.

Main issue is dealing with used printer and PC`s, also spare parts of these.

YouWipe - Certified Data Erasure is widely used by both public-sector and private industries around the world.
YouWipe has been recognized and successfully certified under rigorous and professional standards, by governments and independent security organizations,
such as NATO, the UK National Cyber Security Centre (NCSC),
the Common Criteria (EAL +3), the Dutch General Intelligence and Security Service,
the Finnish National Cyber Security Centre (TRAFICOM),
and ADISA (UK Asset Disposal and Information Security Alliance), among others.
Request Your Trial Today 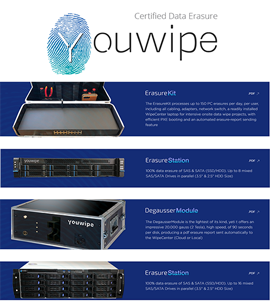 Automatically Closes In 20 seconds
TOP
We use cookies to ensure you get the best experience when using this website.